Penderry is a community on the edge of Swansea city centre. The community has faced a number of challenges but also has significant resilience and is situated amongst some valuable natural resources including common land and a historic woodland with rich biodiversity which is an important part of creating wellbeing in the future with the community.

Pobl, a housing, care, and community support organisation, is a forward looking organisation that already makes significant investment in working with the community to create liveable places and to improve wellbeing and wants to increase evidence informed approaches that support community well being. Partnership working is at the heart of this.

Urban Habitats worked to build capacity within the client and design team; coordinated a Health & Wellbeing stakeholder group; developed a wellbeing strategy as a golden threat through the masterplan proposals; and developed an interdisciplinary framework to help future assessment of wellbeing impact.

The wellbeing workstream group brought together stakeholders including: Pobl’s team, Public Health Wales, Swansea Bay University NHS Health Board, third sector organisations, and Swansea University. The approaches took a WHO Healthy Cities approach: combining placemaking and public health approaches. This included, as far as possible, recognising agency and co-production as a wider determinant of health and identifying opportunities for this to happen at various levels through the framework masterplan and its individual projects.

The outputs of Urban Habitats work included a community health profile comprising quantitative public health data which highlighted significantly poor health outcomes and levels of children living in poverty. This is not a rounded picture of the community though and therefore qualitative evidence from tenant surveys and interviews was included to highlight the resilience and existing assets that exist already in Penderry. Urban Habitats undertook site visits including meeting with members of a new mens shed, an established community shop, and food bank. The profile that emerged provides a baseline of population health, identifies inequalities in distribution of impacts, and potentially vulnerable groups within the community.

Green infrastructure plays a key role in the masterplan and Urban Habitats worked with specialist designers to consider how aspects such as habitats, ecology, and biodiversity could be leveraged for community health benefit. The strategy also considered physical activity, food environment as part of the overall proposals. To allow this thinking to be carried forward by individuals and organisations responsible for developing certain projects or part of this in future a framework was developed that linked masterplan priorities with population groups and health benefits. This links each proposal to wellbeing goals within the Wellbeing of Future Generations (Wales) Act 2015 and wider social benefit.

From this project we learned more about the amazing work that Pobl undertake on the ground on a daily basis with communities. We met some amazing people who in the most demanding of circumstances were working selflessly for the benefit of the wider community in ways that public authorities and organisations often struggle to do. This project reinforced the value in allowing time for stakeholders from different disciplines and perspectives to understand each others different ways of working in order for rounded strategies to then emerge. 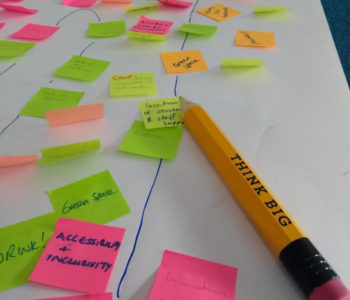